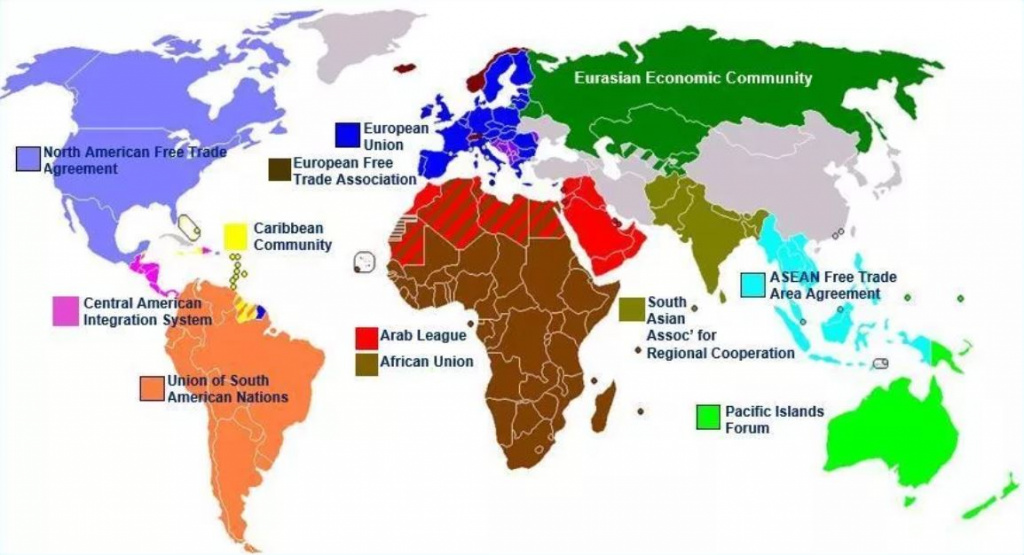 In the second half of the 20th century, as a result of the unprecedented strengthening of the economic life internationalization, two main trends that determine the modern development of the world economy - globalization and regional integration-were formed.

The diversity of integration models allows the majority of States, regardless of their position in the world, capacity and level of development to seek and find their place in these processes.

The strengthening of economic interdependence of countries as a result of international regional integration and globalization of foreign economic relations gives a powerful impetus to the development of economic systems at the state, regional and global levels. One of the results of these factors is the formation of trading blocs. So what is a trading bloc?

A Trading bloc is a group of countries that have reduced or removed trade barriers for its participants. Trade blocs are a form of economic integration and it increasingly forms the structure of world trade. To form a trade bloc, countries conclude international treaties.

Typically, trade blocs have their own administrative and regulatory bodies. Some trading blocs also set political goals. The purpose of the trade blocs is to free trade from protectionist measures and to create an enabling environment for trade among members.

The World Trade Organisation (WTO) permits the existence of trading blocs, provided that they result in lower protection against outside countries than existed before the creation of the trading bloc . Like any other form of integration process, the trading bloc has its own advantages and disadvantages.

Advantages of the Trading bloc

Because low cost imports lead to lower priced imports, there is a consumption effect, with increased demand resulting from lower prices.

Producers can benefit from economies of scale, resulting in lower costs and lower prices for consumers.

Disadvantages of the trading bloc

Along with the advantages, the participation of States in the trading bloc has a number of disadvantages.

Trade diversion arises when trade is diverted away from efficient producers who are based outside the trading area.

The EU and US have a long history of trade disputes, including the dispute over US steel tariffs, which were declared illegal by the WTO in 2005. In addition, there are the so-called beef wars with the US applying £60m tariffs on EU beef in response to the EU’s ban on US beef treated with hormones; and complaints to the WTO of each other’s generous agricultural support. During the 1970s many former UK colonies formed their own trading blocs in reaction to the UK joining the European common market.

There are different types of economic integration trading blocs:

Preferential trade areas (PTAs) exist when countries within a geographical region agree to reduce or eliminate tariff barriers on selected goods imported from other countries in the region. Often this is the first small step on the way to creating a trading bloc.

Free trade zone (FTZ) is a type of international integration in which customs duties, taxes and fees, as well as quantitative restrictions in mutual trade in accordance with an international Treaty are abolished in the participating countries. This is a deeper type of integration than preferential agreements.

Each country-member retains the right to independently and independently determine the trade regime vis-à-vis third countries. In most cases, the terms of the free trade zone apply to all goods except agricultural products.

Customs Union, CU — an agreement between two or more States (a form of interstate agreement) on the abolition of customs duties in trade between them, a form of collective protectionism from third countries.

The customs Union also provides for the formation of a «single customs territory». The great example of CU is the Eurasian Economic Union (EAEU).

A common market (or single market) is the first significant step towards full economic integration and arises while countries-members are freely trading all economic resources, not just tangible goods.

This means that all barriers to trade in goods, services, capital and labour are removed. In addition, along with the elimination of tariffs, non-tariff barriers are being reduced and eliminated.

For the common market to be successful, there must also be a significant level of harmonization of microeconomic policies and General rules on monopoly power and other anti-competitive practices.

There may also be common strategies affecting key industries, such as the common agricultural policy (cap) and the common fisheries policy (CFP) of the European single market (ESM). For example, Southern Common Market (Mercosur).

In that way, the trade bloc is a free trade zone of several countries adhering to one or more agreements on taxes, tariffs and trade.

In recent decades, against the background of increasing globalization, the processes of international economic integration have significantly evolved and acquired new features.

The result of this process was the emergence of a wide variety of types of trade bloc, as well as the strengthening of integration associations, the accession of states to the trade bloc has its own advantages and disadvantages, which affect the economy of the state.